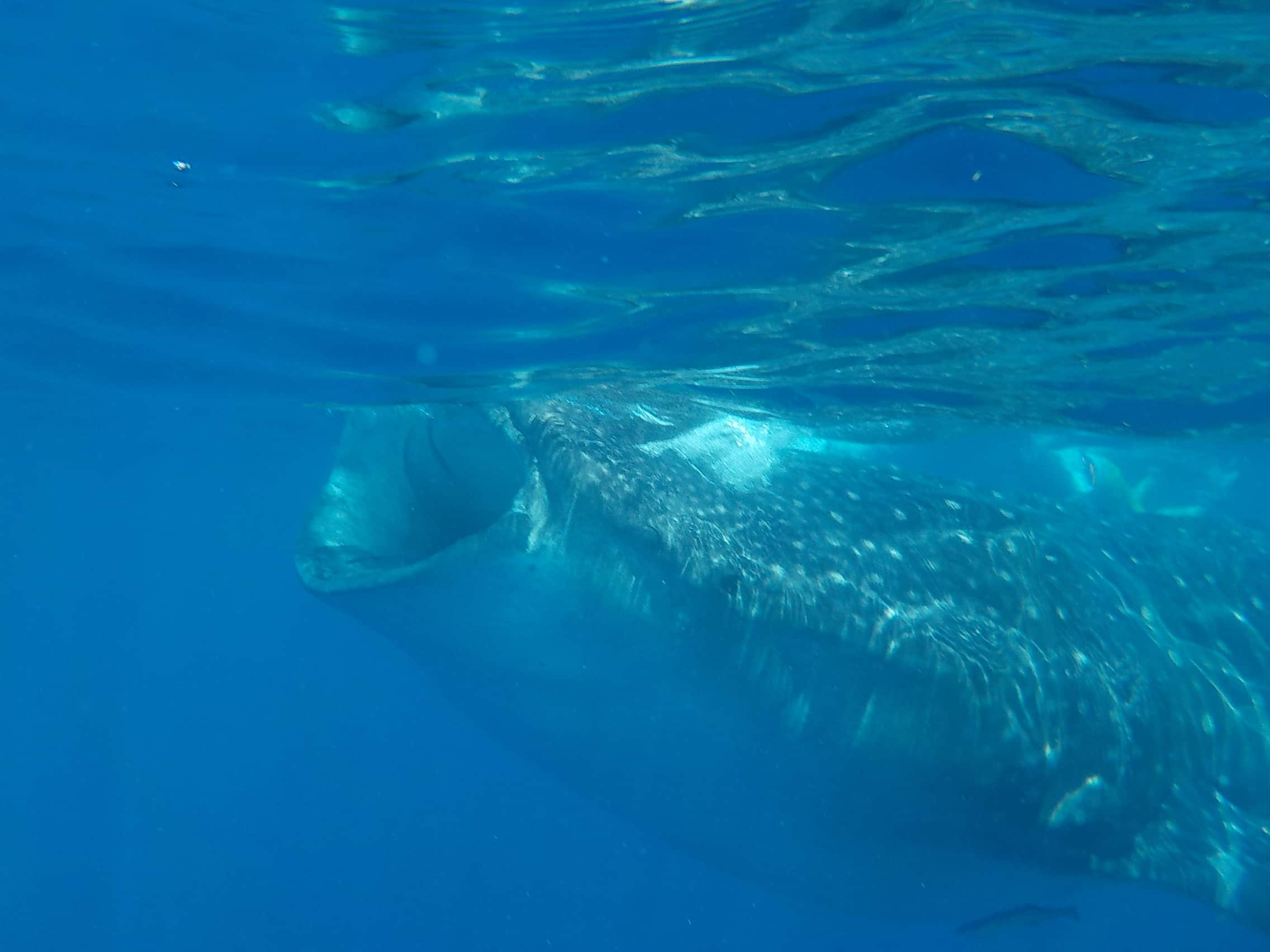 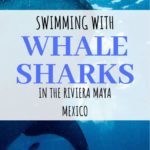 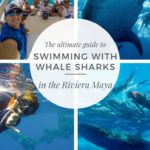 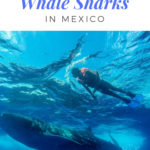 In this blog post, you are going to learn everything you need to know about swimming with whale sharks in Playa del Carmen to help you prepare for this magical experience.

Just here for the referral??

I recommend doing this tour with Living Dreams Mexico. They are the most ethical and awesome company around and it’s a flat fee, no hidden costs.

They even give you all of the photos included in the price, most companies charge $80 or more for this alone!

You can check the current pricing and book by clicking here.

Swimming with these gentle giants is hands down one of the best experiences of my life. If you have followed my travels for a while you will know that’s quite a big statement coming from me. But it’s true.

I swam with whale sharks in Mexico for the first time in 2018 while I was visiting Isla Holbox, although I never wrote about my experience there, I’ll explain why a little later. But I loved it so much that I knew it was something I wanted to do again.

Now it’s something I try and do each year during the Mexican whale shark Season.

It can be tricky to navigate with tour companies in hotels and hostels doing the hard sell on you and it is one tour you really do need to do your research on. So to help you out I have tried to include the key things in this post to help you have the best experience swimming with whale sharks in Mexico. 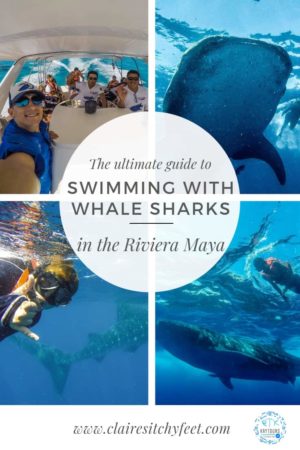 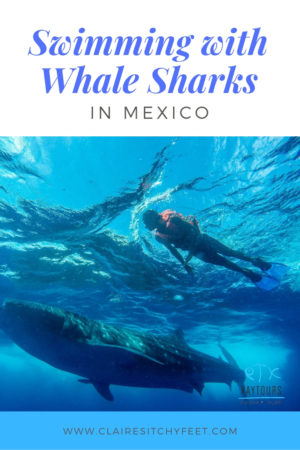 Can you swim with Whale Sharks in Playa del Carmen?

The Whale Sharks actually don’t come directly to Playa del Carmen, they are off the coast of an island close to Cancun called Isla Mujeres. You can also find the whale sharks close to Isla Holbox which is another island north of Cancun.

It’s the bull sharks who visit Playa del Carmen, not the whale sharks.

You can easily take a whale shark tour from Playa del Carmen, Tulum, Cancun, Puerto Morelos, or anywhere else in the Riviera Maya. The tour company will simply pick you up from your hotel and bring you to the marina in Cancun where you will then get on a boat to make the short trip over to where the whale sharks are.

It is also possible to do a Whale Shark tour from Isla Holbox, but that requires you to stay for at least 1 night on the island and it’s a little more complicated than going from the mainland.

When is whale shark season Mexico 2021?

You may see other dates advertised, but these are dates set by tour companies. Most don’t start running tours until June just in case the whale sharks are late arriving. This saves upsetting customers by having to cancel their tours or taking people out on a tour and not seeing any whale sharks.

If you are planning on visiting Mexico just to see the whale sharks, then I’d plan to go sometime in June, July, or August to be on the safe side. 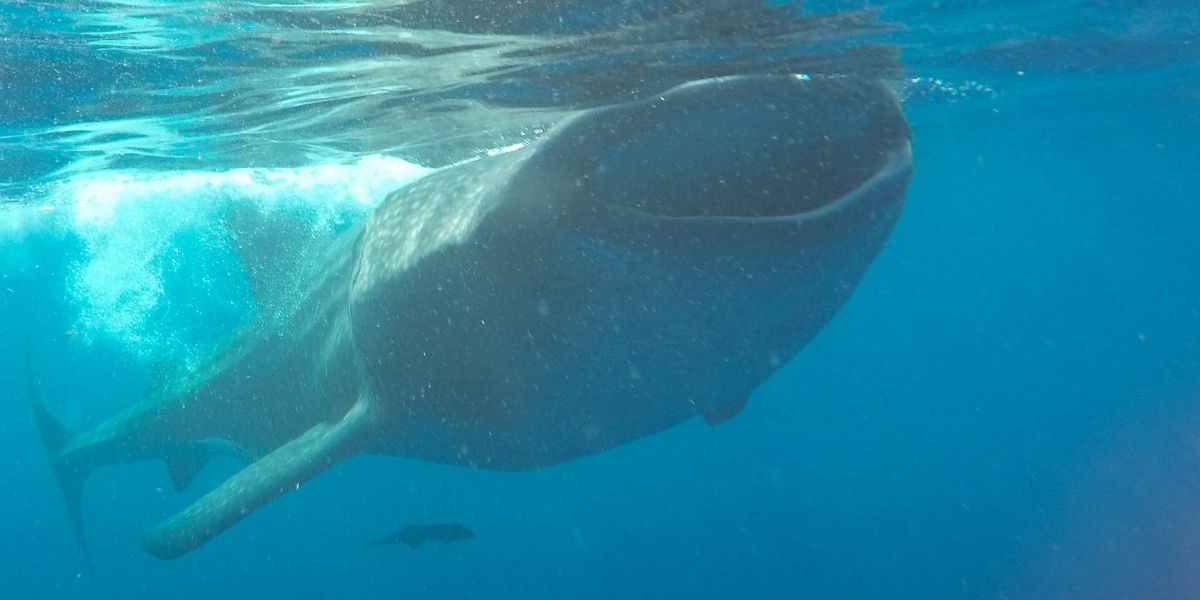 Where is the best place to swim with whale sharks in Mexico?

In the Riviera Maya, you can swim with whale sharks in two locations:

Unless you are planning to visit Holbox for a few days it isn’t an option to do a whale shark tour from Playa del Carmen to Holbox, it is just too far away.

The only option for a whale shark tour from Playa del Carmen is to visit Isla Mujeres as you can easily do it in a day.

You can also swim with whale sharks in Cabo San Lucas, La Paz, and Baja California from November through until mid-May each year (basically when they aren;t in the riviera Maya).

There are many things you need to be aware of before swimming with whale sharks. I have put a few bullet points below:

Sunscreen is a big no-no as it can be harmful to the whale sharks, yes even your reef-safe stuff. Instead, it’s better to invest in a good rashguard and hat so you can cover up from the sun as much as possible.

Then after you have finished swimming with the whale sharks you can smother yourself in all the reef-safe sunblock you like! 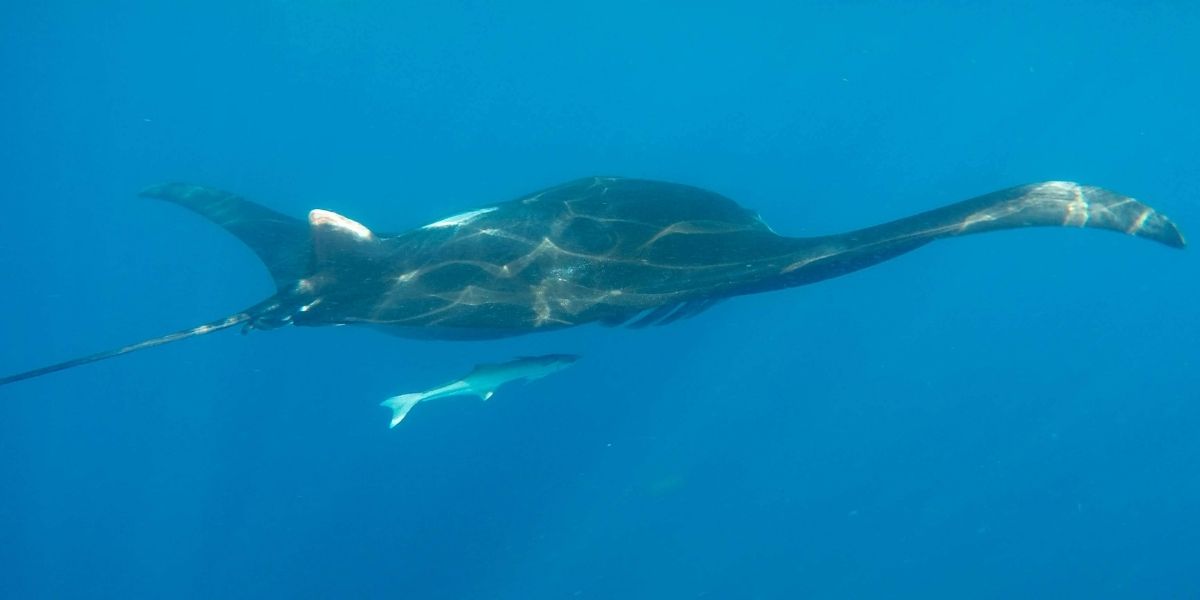 The Whale Sharks are a protected species, as are the waters they migrate to in Mexico. So one of the main reasons I didn’t write about my Whale Shark experience on Holbox was that I just didn’t know enough about the ethics of the whole thing to be about to recommend anyone to do the tour with. The company I did the tour with were ok, they did nothing wrong, but it could have been better.

I asked to borrow a GoPro to take some video and pictures as mine was broken – they ran out and didn’t tell me until that morning so there was nothing I could do. So the guide told me he would take some for me and charge me $10 USD… This was the best shot he got.

Then on the tour itself, everything just felt so rushed. Now that is partly because of the rules in place to protect the Whale Sharks but some companies handle this better than others. We arrived late and there were already a lot of other boats there. We were then put in pairs and each pair gets 2 chances to snorkel with the Whale Sharks. The guide shouted now, I jumped in, swam for what felt like 10 seconds, and then told to get out.

Then we went to another crowded place and snorkeled while the captain made lunch. Now I don’t mean to be negative, because the whole experience of getting to swim with a whale shark was unbelievable, and as I said before, it is one of the best things I’ve ever done. I just expected better service from the tour company.

Cost of a Whale Shark Tour

Whale Shark tours aren’t cheap I paid around $120 USD which is on the cheaper side as I know of companies who charge $250 for the same group tour. Now I’m all for saving a few bucks, I’m much more of a hostel and public bus kinda gal, but if I could go back and do this again, I’d book the $250 tour. Because the experience I had on the $120 tour was pretty crappy when I compare it to the experience I had on the one that cost $250.

This is a once in a lifetime experience. It’s not something you scrimp on. 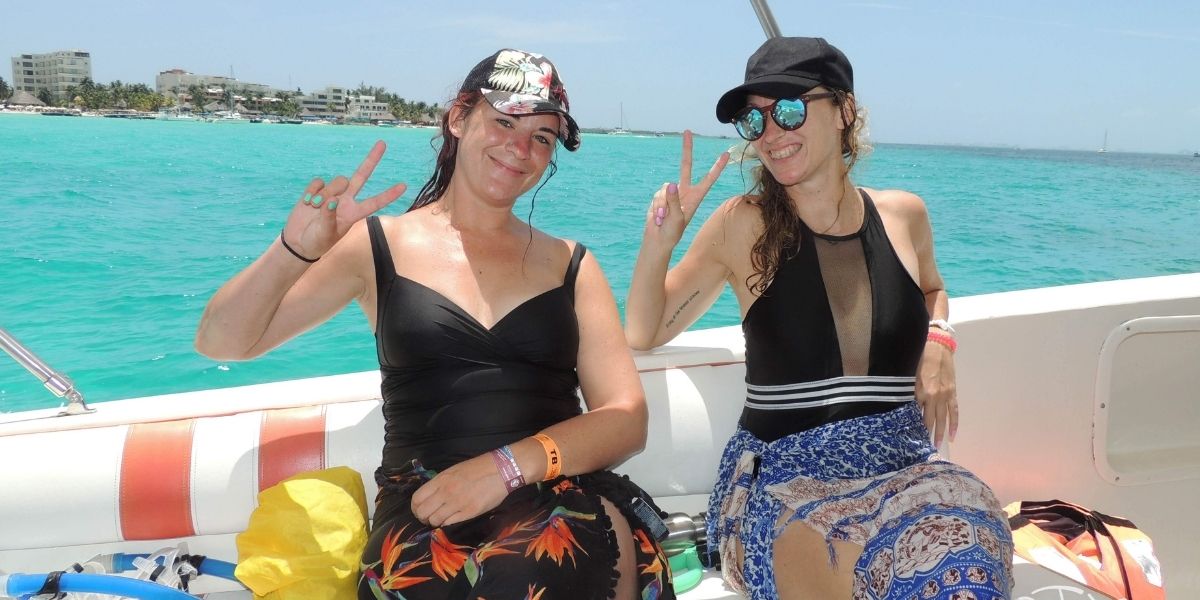 Fast forward to now and having lived in Mexico for some time now I can speak with much more authority when making recommendations.

There is only one company that I recommend to book the Whale Shark tour from Playa del Carmen with and that is Living Dreams Mexico.

I know one of the owners personally. He is the guy rallying people to clean up the beaches in Playa, making huge steps to become a plastic-free company, and constantly speaking out against animal cruelty.

With them it is all in the detail – professional photos are included, as are snacks, and drinks. These guys even give you a blanket and cushion in the minibus!

Many companies give you one price and then like to add on extra for things like life jackets, wet suits, and photos.

They don’t do that…the price you see here is the price you pay.  ALL extras included. The professional photos/ videos they include are valued at $100 USD. It doesn’t take a maths genius to see this is a pretty sweet deal! 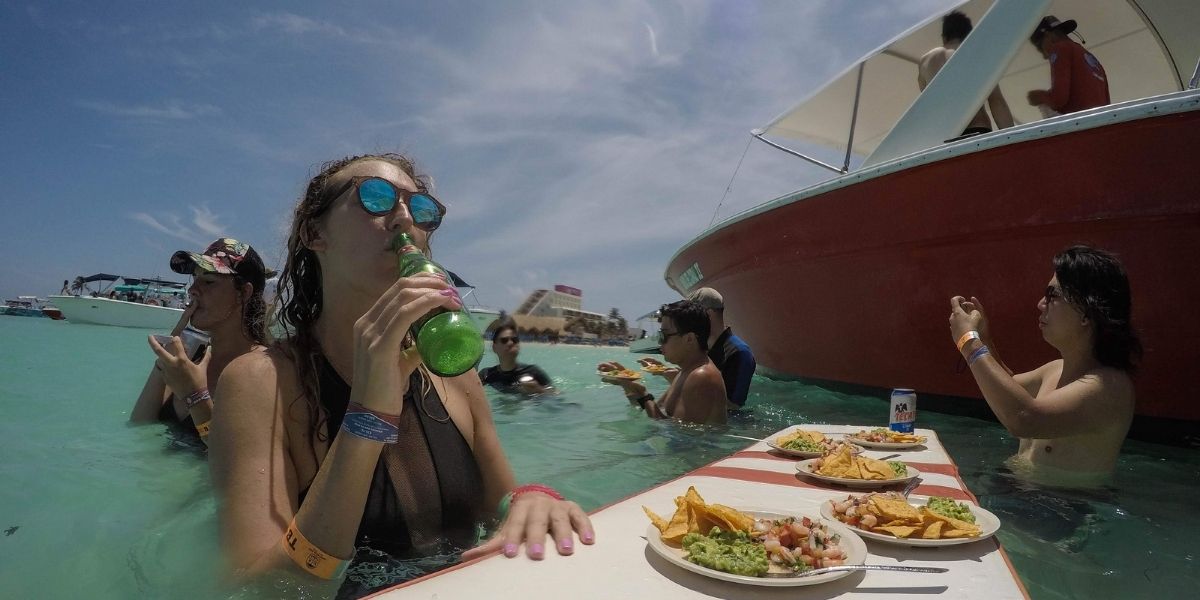 What’s Included in the Tour

The whale shark tour includes pickup from your hotel or apartment in Playa (they can also pick up in Tulum, Puerto Morelos, and other places if you ask) and transport you to Cancun. From there you will be met by the boat and begin your short ride to Isla Mujeres. You will be provided with a wet suit (optional), a life vest (mandatory), and snorkeling equipment. Onboard you will be offered soft drinks all included in the price.

Once your whale shark swimming experience is over it’s time for lunch! This was so much fun. Lunch was freshly prepared ceviche and tostadas served on a surfboard in the beautiful turquoise waters of Isla Mujeres.

I recommend doing the whale shark tour with Living Dreams Mexico. They are the most ethical and awesome company around and it’s a flat fee, no hidden costs. Photos included.

You can make an inquiry simply by adding your name and email address in the form below and someone will be in touch with you within 24 hours.

The best bit, for me, is the pictures. They will take pictures and videos of you so you don’t need to and you can just enjoy the experience. Now, I know it’s not all about the photos, it’s the memories that are important. But I must admit I still feel a bit gutted about not having any photos and I would have gladly paid $100 USD for a photographer. 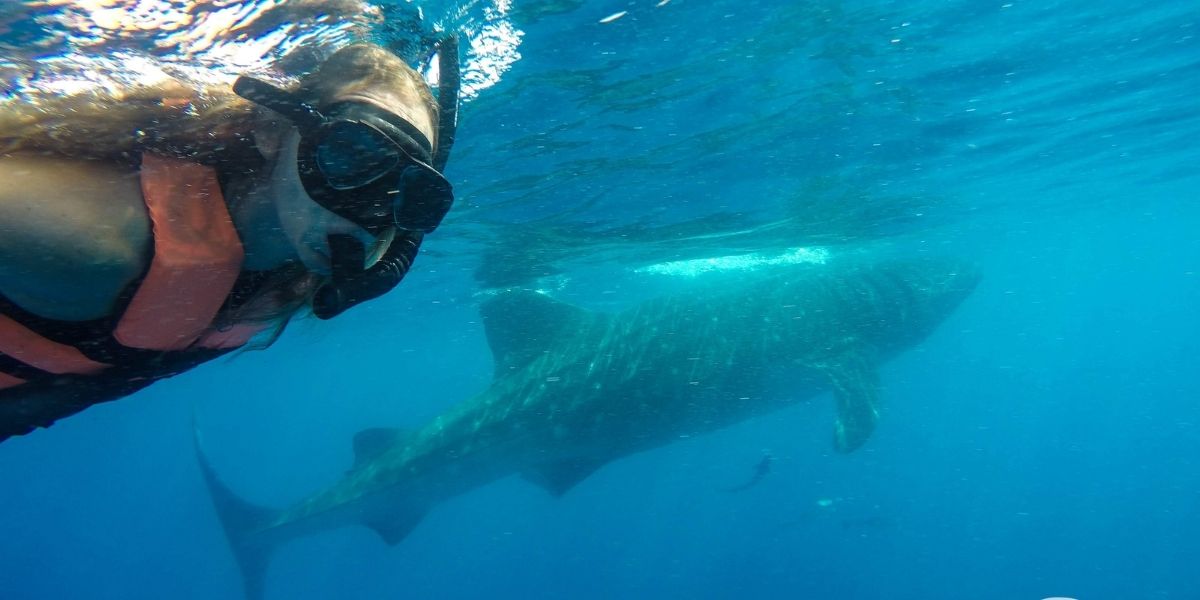 If you are thinking of doing the whale shark tour from Playa del Carmen, Cancun, or Tulum then my biggest piece of advice is to do your research first.

Ask questions, find out what is included, how many people will be on your boat, how long you will get to swim with them, etc. Then check reviews and make sure everything the company has told you checks out. Don’t just book the cheapest tour and hope for the best. This is a once in a lifetime experience and you do not want to just book any old tour and hope for the best.

If you book this whale Shark Tour with Living Dreams please mention my name when booking so they know where you learned about them.

Looking for somewhere to stay
in Playa del Carmen, Cancun, or Tulum?

Check out my accommodation guides

Where to stay in Playa Del Carmen

Where to stay in Cancun

Where to stay in Tulum

I also recommend booking one of these Airbnb’s. They are all in great locations and are super reasonably priced.

Stunning Studio Close To The Beach In Playa del Carmen

Cute Studio In Central Playa (close to 5th & the beach)

Stylish Apartment with Parking Close to the Beach

Why You Need A Colombia Tour Guide | Using Colombian Buddy

Brussels Itinerary (Plus Bruges and Ghent) 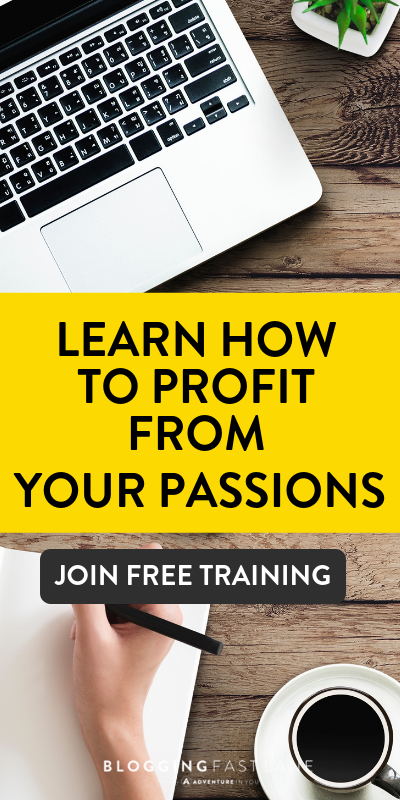