Given Merida’s relatively-central location in the Yucatan Peninsula, this city makes for the perfect place to use as your homebase for amazing and varied day trips.

From cenotes to Mayan ruins, colonial cities to UNESCO World Heritage Sites — and even one of the Seven Wonders of the World — there’s so much within a few hours of Merida.

Traveling within the Yucatan Peninsula

You have several options for Merida day trips transport. These include renting your own car, taking the bus, or taking the colectivo (shared van).

The easiest, most convenient way to see everything? A rental car, of course.
Known as one of the safest states in Mexico, driving in Yucatan is as well, quite safe.

A few things to keep in mind:

If you’re renting a car, consider picking it up directly from the airport. If not, there are a few rental companies in downtown Merida, and also on Paseo de Montejo.

Don’t want to drive? No worries!
Mexico has an amazing public transportation system. From buses to colectivos (shared vans), you can easily get to every place on this list — even if you have no desire to drive to them!

Mexico’s biggest bus company is ADO. They have multiple trips each day to/from the majority of places listed here.

ADO has large buses with big comfortable seats and outlets at each seat for your gadgets. You can buy your tickets in advance online, or show up to the bus station 30-45 minutes before the trip to buy them.

Colectivos (shared vans) are the most inexpensive way to get around. As a general rule, they cost half as much as the bus, but take 25% longer to get there because they make more stops.

They are usually 10- to 12-passenger vans, think Nissan Urvan or Toyota Hiace, that do tend to have air conditioning. Overall, they are pretty comfortable; but less so than the bus.

Note that colectivos aren’t available for every destination on this list. When available, information for them had been included.

Now that you have a better understanding of your transportation options, let’s examine the 6 best Merida day trip destinations. 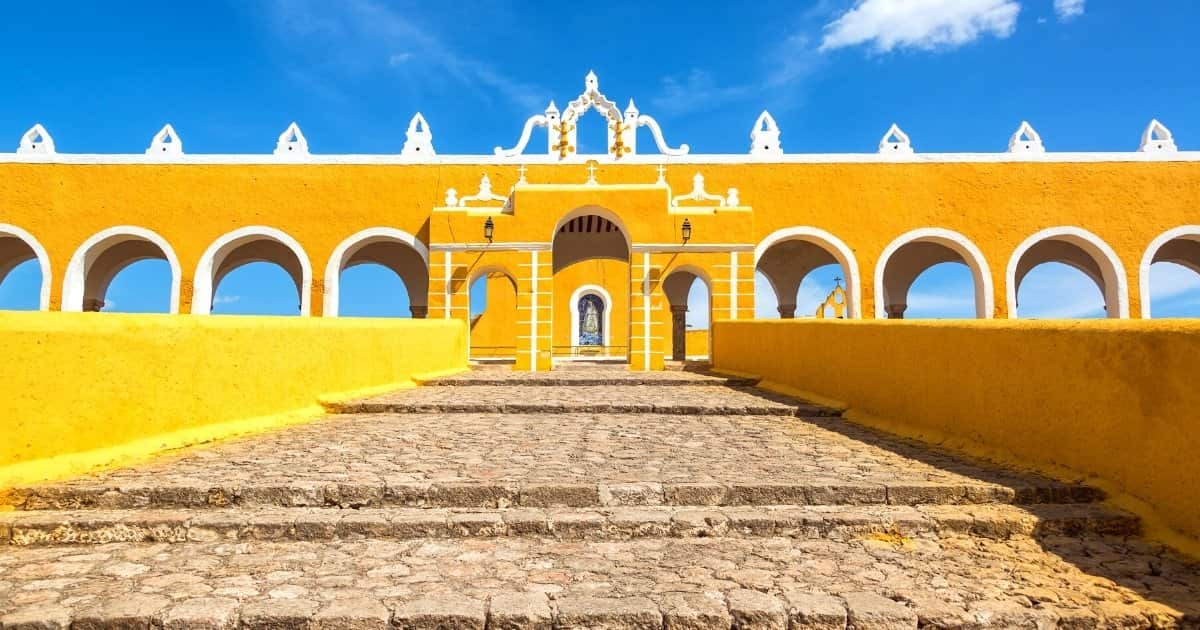 So just what is a Pueblo Mágico?

“Magic Town” is a prestigious designation given by the Secretary of Tourism to about 120 small(er) towns in Mexico. These places have been recognized for things including rich cultural history, unique folklore, amazing natural beauty, and more.

In the case of the small colonial town of Izamal, the magico (magic) lies in its monochromatic esthetic!

Known as the “Yellow Town,” Izamal is, well, yellow! As in: All buildings in downtown are painted yellow.

However, as soon as you leave the approximately 20 square blocks of downtown, the buildings return to a more conventional color scheme.

Downtown Izamal’s small size means you can see the whole area in about two hours. Stroll around and check out the main church, the Convent of San Antonio de Padua, or take the horse-drawn carriage tour.

Sample some traditional Yucatecan food at Kinich Restaurant, or at the mercado (market). Commonly only eaten on weekends, head to the Mercado Municipal De Izamal to sample dzik de venado (shredded venison), a local delicacy.

Another of Yucatan state’s Pueblos Mágicos, Valladolid is known as one of the prettiest colonial cities in all of Mexico. An increasingly popular destination, Valladolid makes a great day trip, as well as a great overnight or weekend trip.

Get your camera ready!

Valladolid has so many gorgeous buildings to photograph or use as photography backdrops. Some of it’s prettier streets are the Calle de los Frailes and Calle 50.

A few other iconic photo ops include the giant, colorful letters spelling out Valladolid and the large talavera tile fountain in the back of the famous La Casona de Valladolid restaurant.

See the amazing art at Casa de los Venados (casadelosvenados.com), the private home of John and Dorianne Venator. The two open their home for daily tours at 10am to see their impressive collection of more than 3,000 pieces of folk art.

If you’re in the market to buy some of your own art, head to Kuxtal Cafe & Mexican Art. They sell various styles of iconic Mexican folk art, made by artisans from all over the country.

Looking to cool off with a swim in a cenote?

Some of the Yucatan Peninsula’s prettiest cenotes are located within 30 minutes of Valladolid. These include Cenote Ik-Kil, Cenote Zaci, Cenote Suytun and Cenote Oxman.

Another UNESCO World Heritage site, the walled city of Campeche hides a rainbow of colored buildings within!

Located on the Gulf of Mexico, Campeche is vulnerably-positioned. Centuries ago, the citizens had to wall in their city to maintain a line of defense against incoming pirates.

Nowadays, you can walk along the walls atop the Fuerte de San Miguel (Saint Michael’s Fort) to take in the colorful city views, as well as see the old cannons pointed directly at and the Gulf of Mexico.

You’ll have to pay about $25 pesos/$1/€0.50 to climb to the top for the views, but it’s worth it. There’s also a small museum, Museo de Arqueología Subacuática, at the entry to the stairs to climb the fort walls. 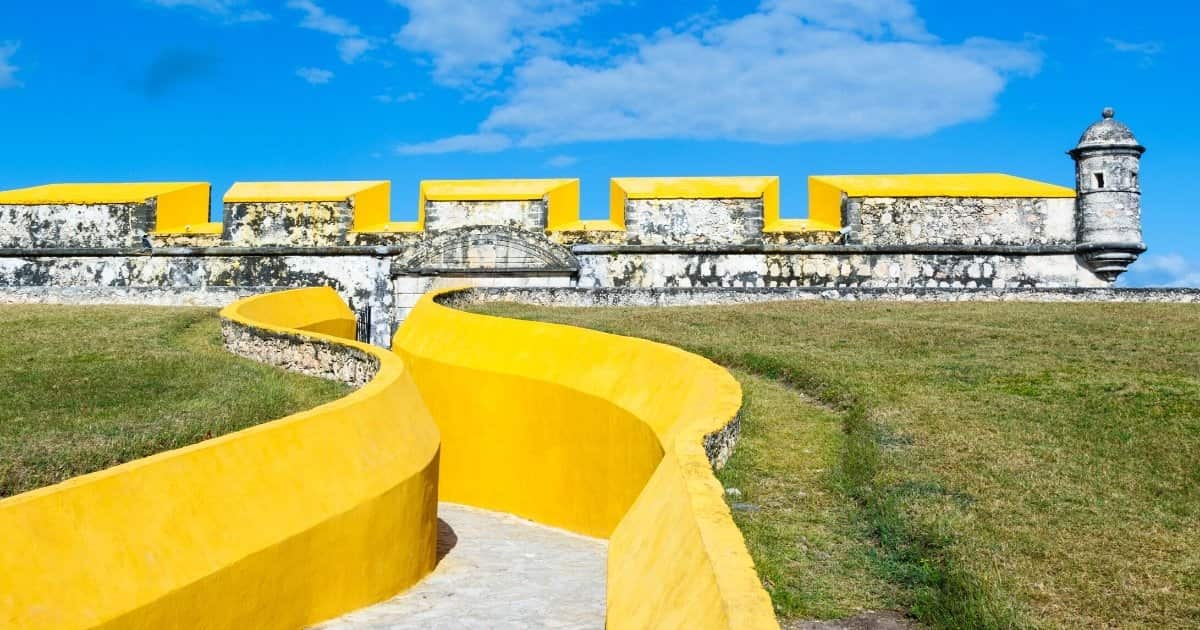 So about these colorful buildings… Campeche is known as one of Mexico’s most colorful cities. The entirety of downtown is painted in every color of the rainbow.

Though not a large area at about 20 square blocks, leisurely stroll downtown admiring gorgeous buildings that double as instagrammable photography backdrops. Stop in at the adorable Altagracia Café cafe for a sweet snack.

For a full meal, grab an outdoor table at La Parrilla Colonial Campeche, or one indoors at Marganzo Restaurante.
Sample some of Campeche’s local dishes, including pan de cazon, at El Bastión de Campeche. This locals-favorite is one the restaurants lining the Zocalo (Main Square).

After eating, hop on a tranvia (tram), parked at the Zocalo, to sit back, relax, and see all the sites you might have missed. These include the Fuerte de San José and Ex-Templo de San José.

At the end of the day, head west to the Malecon (walkway) to catch the sunset on the Gulf of Mexico.

One of the Seven Wonders of the World, Chichen Itza likely needs no introduction!

Chichen Itza usually ties Mexico City’s Teotichucan for the most visited archeological site in the country. The two each average about 2.75 million visitors per year!

A UNESCO World Heritage Site, Chichen Itza is actually one of the most important Mayan archeological sites in the world.
When visiting, you’ll see the iconic El Castillo (The Castle AKA the Temple of Kukulcan), Temple of the Warriors, Wall of the Skulls, Grand Ball Court, Group of a Thousand Columns, and Sacred Cenote, among other things.

With a site of this size (740 acres/300 hectares) and such historical significance, you may want to consider hiring a guide. There are many guides waiting at the entrance when you buy your tickets who you can hire for the day.

Pro Tip: Arrive early — as in, as close to 8 am when they open as you possibly can — to beat the crowds. Getting there early also means you beat the heat.

As with many Mexican archeological sites, most trees at Chichen Itza have been cleared for ease of study by historians. While that’s great for them, it’s not great for visitors, as shade is at a premium.

Remember to wear your most comfortable sneakers, sunscreen, and a hat, and bring your reusable water bottle.

Getting to Chichen Itza: 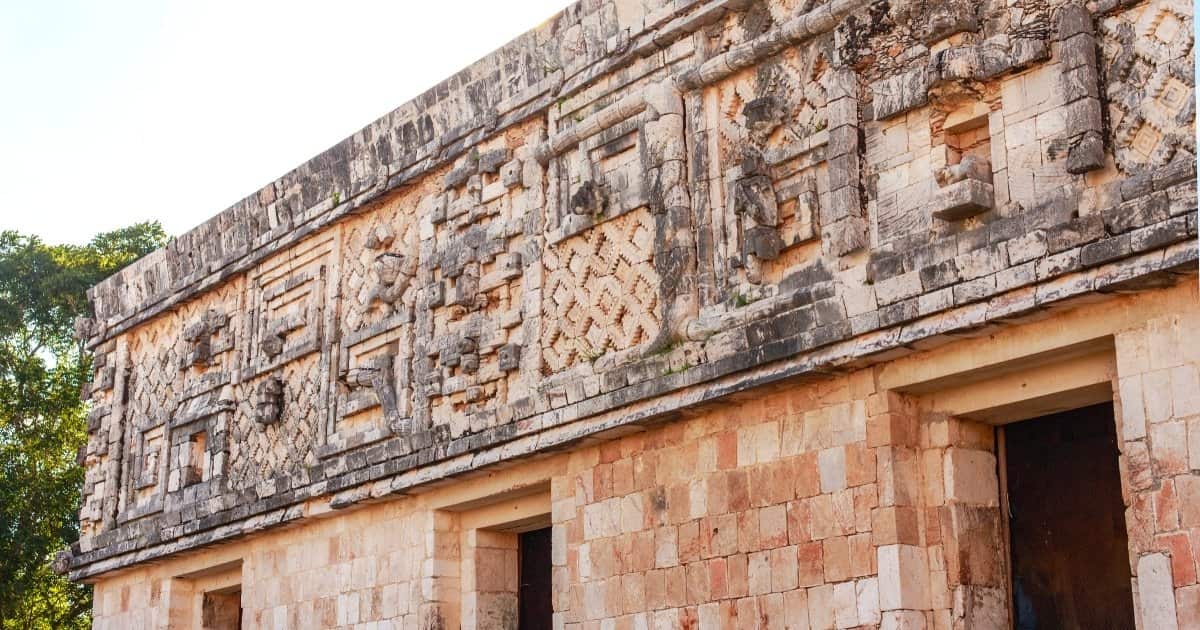 Though lesser known than Chichen Itza, Uxmal is just as impressive — though much less crowded and much, much less touristy. Uxmal sees about 275,000 annual visitors versus Chichen Itza’s 2.75 million!

Besides the obvious of smaller crowds, you also won’t be approached by hordes of souvenir vendors, and all the other perks that come with visiting hidden gems.

The top reason to opt for Uxmal over Chichen Itza?

You can actually climb the structures and one of the pyramids.

Though you can’t climb the large El Adivino (Pyramid of the Magician), you can climb the nearly-as-tall pyramid adjacent to it. You’ll get amazing views of the entire site from atop this pyramid, the tallest vantage point at Uxmal.

You can also get up close and personal with Uxmal’s intricate stone carvings at the Nunnery Quadrangle building and see some of the beautiful Mayan design esthetics the Puuc sites are famous for.

A UNESCO World Heritage Site, the Uxmal site consists of buildings in the Puuc style — but it’s not the only with this esthetic.

RUTA PUUC (If you have your own car)

Uxmal is the most famous of the five archaeological sites along the Ruta Puuc (Puuc Route), a 19-mile/30 km drive.

However, the buildings at Labna, Kabah, Sayil and Xlapak, all feature similar stone carvings and impressive Puuc-style design elements.

As these are lesser-known, there’s a chance you’ll have all of these amazing places to yourself.

Puerto Progreso is the closest beach town to Merida. As the “puerto” in the name might have cued you in on, this is a cruise port.
On days when the ships dock, expect thousands more people than usual in this beach town. If you’re looking to have Progreso all to yourself, check to see if there’s a cruise docking before you visit.

Once you arrive in Progreso, walk down the Malecon (walkway) for a bite to eat, then rent a beach chair for the day, either on the beach (usually about $100 pesos/$5/€3) or at a beach club.

Two of the best known clubs are Silcer Beach Club and El HaGuay.

El HaGuay is located right next to the giant, colorful Progreso letters, on the eastern end of the beach. They let you have a beach chair for the day for free, as long as you order food and drinks.

For a sunset dinner, head to the other end of the beach to eat at Progreso’s famous Eladio’s Bar. For a fancier atmosphere, check out Crabster Seafood & Grill and Almadia.

Head to Celestun, Chelem, Sisal, San Crisanto, Puerto Telchac, Chuburna, and Chicxulub. These will have a few places to eat and drink, though little else, and far less of a crowd than Progreso.

Fun Fact: The Chicxulub crater, located only a few miles/kms from the beach, is believed to be the place the crater hit that wiped out the dinosaurs!

Hi, I’m Shelley! I’m a former Miami travel magazine editor who ditched the office for the world! After traveling solo to 14 states in Mexico, she decided to live in Mérida. I created the Travel Mexico Solo blog and the Dream To Destination podcast to inspire women who have always dreamt of Solo Travel & Mexico Travel, but haven’t (yet!) accomplished either goal.

11 Things to do in San Pedro Guatemala

How to get from Cancun airport to Playa Del Carmen

This post may contain sponsored content and or/ affiliate links. This is a way I make an income from my blog without it costing you my readers any money!P.S. I am a participant in the Amazon Services LLC Associates Program, an affiliate advertising program designed to provide a means for sites to earn advertising fees by advertising and linking to amazon.com.